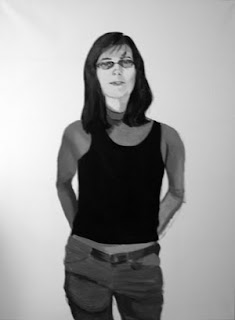 After getting a few tasks done around here things settled down and I started working on two large portraits. In ACRYLIC. It's been years since I did anything in acrylic, and even then it was just small pieces. These two are 36" wide by 48" high.

Well, I started by using straight black paint on the areas that are going to be the darkest darks. The streaking was unbelievable...there was no way to control the paint, and it was drying very quickly. I got the feeling that if I went in to rework places that were still a little wet, something really bad was going to happen, like the paint would just peel off. Disaster, I thought. I remembered freshman year, when we were introduced to different mediums, like casein, then acrylic, then oils. There was such a difference with oil paint--- it felt natural, whereas acrylic felt like liquid plastic. Oil paint was sensuous, flexible, compliant. It worked with me and the brush, flowing smoothly, expressing whatever I needed it to say.

So I ended up using oil paint almost exclusively, except for illustrations, which really needed to be done in jig time. Illustrations are usually pretty small, anyway, and manageable. But the big, big areas on the two portraits today had me freaking out. What to do?

Eventually I walked away and then came back later, and that's when I remembered two things: the second coat of acrylic paint (think wall paint) is always smoother than the first; and mixing a tiny amount of white into anything, even black, makes it more opaque. The streaking and lap marks were gone!

Now I'm beginning to see potential in the paint. There's a seductive quality to the way it memorizes a brush stroke, and I realize why folks who are more expressive than I am are drawn to that. The brushiness can add some interest, or it can be controlled. You can see some streaking on the image, but that's just the first layer. I'm very optimistic at this point.

Oh, And This One 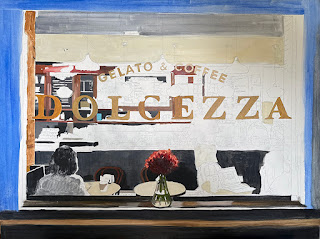