The Arrow of Time (which really should be renamed The Apple of Time, haha) consists of nine 6" x 6" panels, each one showing the poor apple in a later stage of decay. I've got the first three panels done, and here they are:

As mentioned yesterday, we're expecting rain for practically forever, and it's cool outside to boot. So no yard work. But that allows me to spend my time in the studio, and today I worked on five separate paintings, so I'm feeling a little bit virtuous. And Palatka is finished! 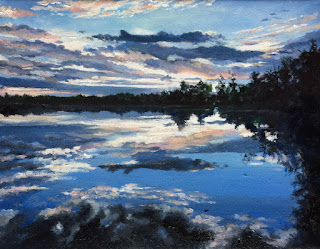 This is Deep Sunset, and at this point I'm trying to do the last few details that will finish it off. I worked for about an hour on the tree, trying to make the branches look believable and recalling the very first session we had as freshmen at Pratt in drawing. We were sent out onto the lawn in front of the Ryerson Building and instructed to draw trees. For some of us it came easily, but it was a struggle for me then, and it remains so today. I can't seem to grasp the inherent structure of trees... Nevertheless, I think what I did this afternoon is about the best I can hope for; there was some wiping and repainting, but it looks okay to me now. 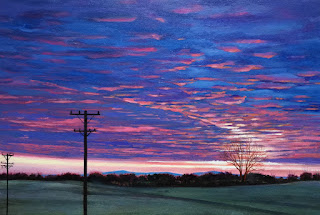 The tree itself— the real one, I mean; the one in the reference photo— was a blaze of red in the sunset. I used a combination of black and Cadmium Red Light to paint it.

Anyway, now I have to deal with the very fine wires on the utility poles, and that ain't gonna be a piece of cake.

Yesterday I had no energy whatsoever, couldn't get motivated to do anything. Realized as soon as I got up this morning that I'd have to make up for it or else be doomed to a day of guilt, so I started in on some of the tasks on the To Do list. Worked through them in the a.m., then got into the studio around 2 p.m. and spent the next four hours on several paintings, a couple of which I'll enter below. 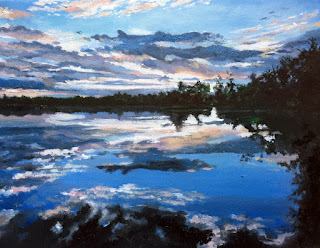 This one is almost finished. I used some of Gamblin's gel medium to get a softer effect on the cloud edges, both in the sky and water. I think all it needs now is a little detail on the foliage. 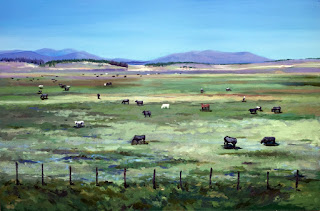 Also nearly done. The cows need to be sharpened up, and in some cases I have to adjust the shadows I'd already put in--- the cows' legs needed to be longer than I'd planned. 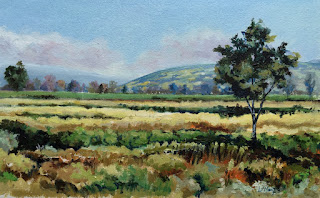 One Third of the Whole

While the two store panels on the left of this painting are by no means finished, at least I can say that I'm one-third of the way to covering the panel with paint.

This is an image of a Whole Foods supermarket on a Saturday night in Washington DC. I love the way each panel depicts different people going about their business of shopping for food items. Because Washington is a cosmopolitan city with people from all over the world, there is diversity in the shoppers at the check-out stands. The second panel has a man or woman wearing a turban, for example. And I equally love the fact that there are bike stands out front.
at April 15, 2016 No comments:

I said that cows would be popping into that little landscape in a previous entry. Today they began to show up, though they are not fully drawn/painted; and I didn't do any of the rusty-brown colored ones yet.

I had been toying with the idea of doing collie dogs instead of cows... It would be fun to see an entire herd of them. 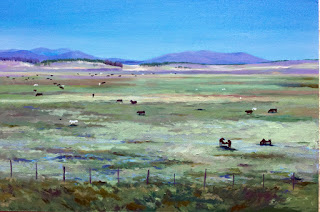 I painted these over the weekend, too, but didn't post them. The top one, Deep Sunset, only needs a red-rimmed tree right where the sun is going down on the horizon, and the wires on the utility lines. The daffodils painting, unfortunately, still has a ways to go. I don't like the blotchy look of the greenery outside the window. 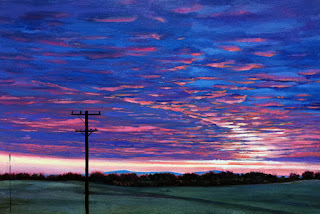 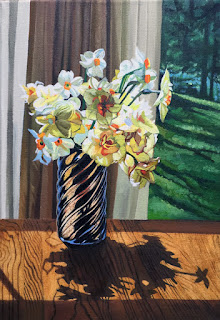 An Embarrassment of Riches, © 2016, work in progress

Working in the garden today; great weather and much that needs to be done. The last several days have been too cold and wet.
at April 11, 2016 No comments:

How Can Such a Tiny Painting Take So Long?

I had to be honest with myself: the face wasn't working, despite the numerous times I've worked on it. So I sanded it down to get rid of the texture that had built up, strapped on the magnifying glasses, and got to work. (You can see some of the sanding marks in the hair and sky.) Used Winsor Orange, Cad Red Deep, Ultramarine Blue and the usual Titanium White. Paid a great deal of attention to the drawing in terms of where the cheek meets the nose, the angle of the upper lip, etc. Now I have to let it dry before going back to refine the planes around the nose.

I know there are artists who could knock this out with a few well-placed strokes and a more imaginative use of color, and I wish I were one of them. 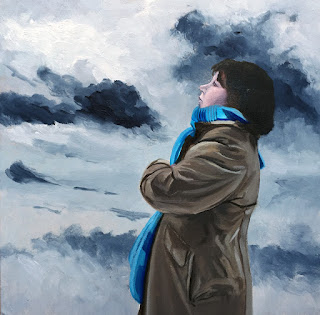 Waiting For The Birds To Return, © 2016, work in progress

Worked on three paintings today. The landscapes are coming along pretty well, and I think the ground is done on Distant Hills. I've put in some shadows where the cows will be. The California landscape, likewise, is almost finished, just needs a few minor details added to the plants. Oh, and I want to take those textural strokes out of the sky so it won't compete with the foreground. 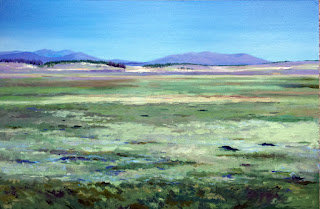 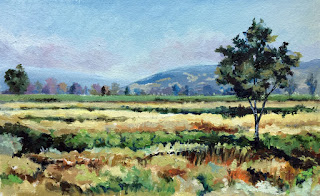 So, the oceanscape is the tenth one in a series of paintings I've been working on for the past few years. They're in groups of four, and the first two groups, Wellfleet and Miami Beach, are currently on view at a gallery in Annapolis. I'm not very far into this one, but wanted to mention that there are very delicate pinkish colorations in the sky and water— I'm not sure they're showing up in this picture. They'll be more visible after the next sitting. 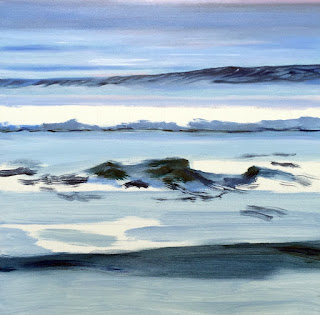 Cows are going to magically pop in to this landscape over the next couple of weeks. I'm having a good time working on the vista, adjusting and re-adjusting the colors and the values... the distant hills were much more purple-y a few days ago, and I lightened the sky. But watch out for those cows... 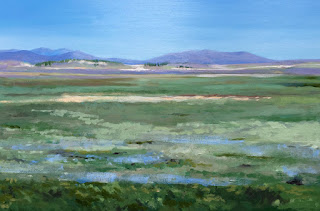 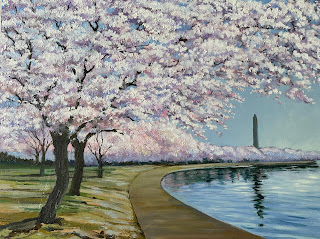