The weather's been so oppressive for the last two weeks with heavy, overcast skies and occasional drizzle. Today we've had a steadier rainfall, and the cat, who had to spend the entire last weekend in the emergency vet clinic as the result of ingesting a lily leaf, has pretty much given up on the idea of going outside anymore.

On the plus side, the bad weather prevents me from working in the garden (where I'll have to rip out every one of the 45 lily plants once I get the chance) and allows me to spend my time painting without guilt. I've been getting a lot done.

Today I tackled the background of Waiting For The Birds To Return. We always know when something just isn't right, and both the texture and the direction of the clouds have been bothering me for a while, so it was time to scrub them with a fine sandpaper. Looks a mess, doesn't it? But it'll pay off in the end. 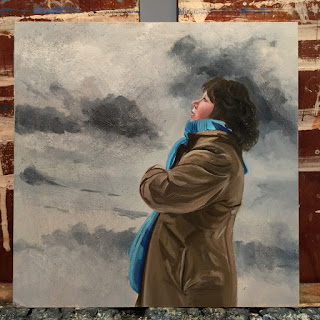 Waiting For The Birds To Return, © 2016, work in progress

Waiting is a small painting; a mere 6" x 6". What you see behind it in the photo is the very unique easel that was given to me by Marilou Meibers, a friend from many years ago. I love it because Marilou, who was one of those people who was beloved by everyone, gave it to me, and because of the back story as well. Her mother had made it for her! It's a hefty piece of furniture, complete with scribblings from Marilou's kids, but the fact that her mother made it blows me away.

At the bottom of the painting you can see the built-up crust of hundreds of layers of paint that have accumulated over the years. 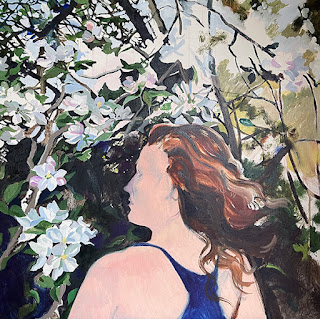