Tomorrow I have to get back to my normal schedule (painting for two hours in the morning, and then whatever I can do after a noonish break), but I did carve out a little time this afternoon for these two. 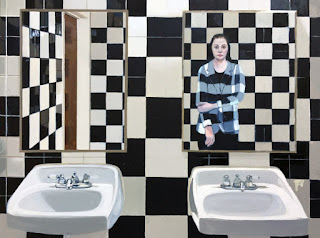 While the taping off of the straight line areas has been relatively successful, I realized that some of the "white" tiles need to be darker as the ceiling light falls off. So there's more work to do that I hadn't planned on. Still, it's going pretty well.

I put a glaze of mixed earth colors on the t-shirt on this one. The actual shirt was brown, but with lovely warm undertones. The next few glazes will darken it somewhat, but I want those undertones to show through. 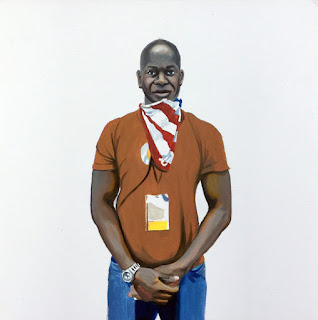 Artomatic will be starting soon; I think I might show the three large black-and-white acrylics of Eric, Tam, and Robert. But this means I have to get back to finishing Robert. Quickly. 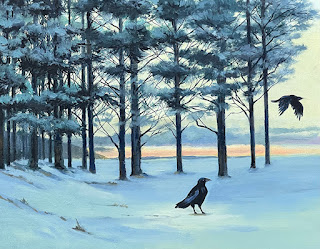