I've been bothered by the persistent misty, hazy look on the face and hands in Coffee With Andi, so today I took a bolder step than usual and mixed up a glaze of Asphaltum (a nice warm transparent brown), Sap Green, and Payne's Gray. Then I mixed in some glaze medium, and stroked it carefully onto the places where the skin needed to be darkened. 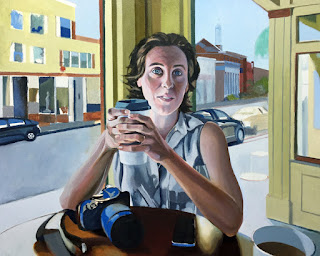 Coffee With Andi, © 2017, work in progress (click on image for larger view)

I have real problems with streaking, as previously mentioned. So after brushing the glaze on, I waited ten minutes and then smoothed out the visible strokes with soft brushes. Then I used the same technique on the arms. I think it's working now.

And I moved on to the jeans on Dion, adding some texture, some lighter lines in the darkest areas under the hands, and a few highlight details. I'm feeling good about the progress on that one, too. 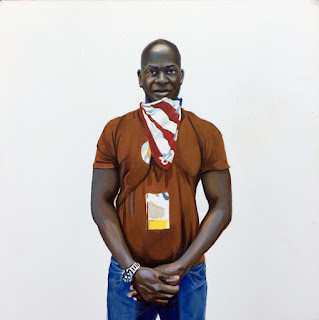 Last night I fooled around with different background colors for Dion in Photoshop, from a muted green to a light beige to a darker beige. Maybe I'll upload those later. I still don't know whether or not to go with any of them.

Anyway, it was a productive morning, as the cat decided to nap upstairs. So I worked on the right side hand and arm on Robert: 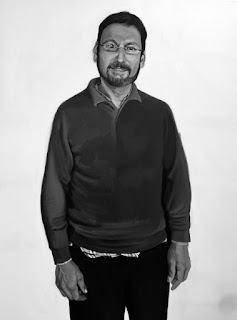 It might actually be done in time for Artomatic. 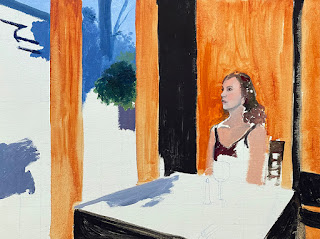