Lately I've been studying the work of two artists whose approach to painting is very different: Erin Anderson and Jan Collins Selman. Anderson does the most exquisite head-and-shoulders paintings of nude women, and she has the ability to cool down skin tones without losing the sense that there is a living, breathing human being underneath. I can't for the life of me figure out how she does it, but I tried to pay special attention to the problematical figures in my painting below, this morning: 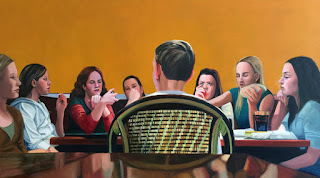 The Chair, © 2018, work in progress (click on image for larger view)
The two faces that I worked on are definitely better— the girl holding the taco on the right is now more credibly drawn, and the one holding the cell phone has more personality and looks less like a cartoon. The violet color on her forehead was better an hour ago; I'll repaint it once it's dry.
Selman's lusciously colored beach and shoreline paintings are alive with energy. Her drawing of sea grasses is flawless; you can almost see them swaying in the wind. Instead of the incrementally graduated, seemingly brushless tones of Anderson's nudes, she uses a vibrant carefree stroke on the grasses. But her powers of observation are evident in the modeling of the water lily pads. I hope to learn something from both of them.