I started this painting a few years ago, and for a long time it's languished on the walls of the studio, waiting for me to work on it. It's very complex, so I tend to put it off, figuring I'll get back to it in July in order to have it ready for the Christmas season (note the Christmasy decor). But then I forget, and by the time November rolls around, it's too late, so I put it on the back burner again, as they say. 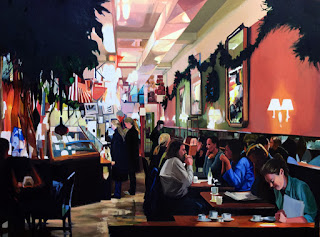 A Quiet Evening In Cambridge 2, © 2017, work in progress (click on image for larger view)

So, here's the back story: I had originally completed a version of this one in a much larger format, but have never been satisfied with it. Determined to do a better job, I went to a smaller size (this one is 18"h x 24"w). Later, when I developed the idea for the Saturday Night Series ( a set of paintings of nighttime shop interiors, looking through the stores' main windows) I decided to add this one to the set and standardize the 18-by-24 inch format.

Now, the original reference photo was a "grab shot," taken as I walked past the store without much thought to what I was doing. It was only when I got home and reviewed the photos from my trip that I realized its potential: I love the warmth and camaraderie of the place, the cheerfulness of it. But the reference shot (see below) is sadly lacking in detail in some places, like the fellow sitting behind the vertical window frame in the center, and a lot of the back wall contains shapes and odd patches of color, so I don't always understand what it is that I'm picturing. 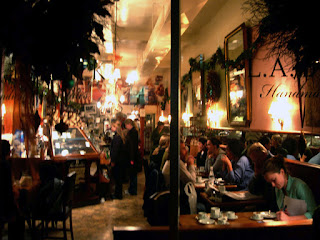 A couple of years later, I went back to the store, only to find to my dismay that it had been renovated, and the interior looked completely different! At least I was able to get some photos of the wall lamps, which were pretty much blown out in the original photo (see that bright spot on the right side wall).

Anyway, since it is now August (already!) I'm getting back to it. Hopefully it'll be done by the end of October. I'm working from the left side to the right, and so far, so good. 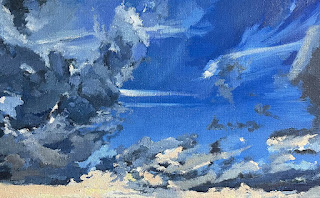