I Really Don't Want To Work On The Desserts

Several years ago a friend advised me to comply with the demands of the art world; namely, to build a recognizable "body of work" that would form a reference point for viewers. In other words, stuff that all had a similar subject matter and style. So I decided to concentrate on the dessert paintings— a subject I like very much and thought would be fun to paint.

After getting 13 of the little panels started, however, I've run out of steam, and over the last few months have found it difficult to force myself into the studio. When I realized what was wrong I went back to my true love, genre painting, and am a much happier artist.

I do have a trick up my sleeve, though, for getting back to and hopefully FINISHING the darned desserts: I've lined them up in a place I frequent, and will eventually be irritated by, oh, for example: the fact that the strawberry glaze isn't rich and deep and red enough; the ragged edge on a spoon looks truly awful; or the shadows on the whipped cream really aren't doing their job. And that will get me motivated again. 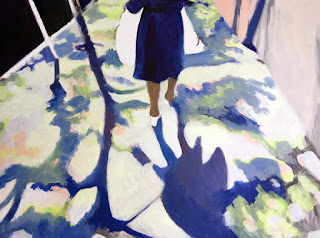