Almost Too Much To Write About

Last night, after spending the day in the studio, we went to the second "Meet The Artists Night" at Artomatic. Dennis was there, and we had a fairly good flow of folks wandering in and out of our space for a couple of hours. I was surprised by the comments. Some people were actually there because they admired our work from a previous visit, and wanted to say hello! I felt somewhat awkward and embarrassed and ended up babbling my head off, but we met a lot of interesting people and I got a photo of a beautiful 9-year old girl to use in the America series.

Two women artists from another corner of the 9th floor stopped by. They're working on a Drawing A Day project, and one of them, Nancy Snyder, was wearing a dress made from fabric printed with one of the drawings. The other artist is Crystal Parmele. Here's Nancy: 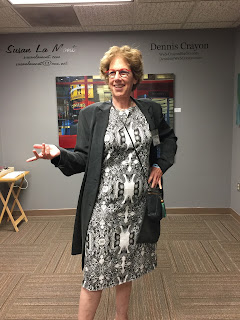 Also on the 9th floor, some great whimsical sculptures by Sheila Godlock. I love these! 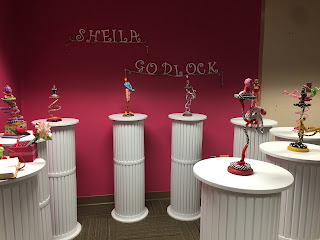 During an early lull in the action, I took photos of some of the comments in my guest book. Here's one page— 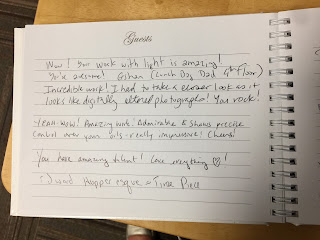 I can't get away from the Edward Hopper reference! I hear it all the time. Hopper was never one of my art heroes, and when there was an exhibition of his work at the East Wing several years ago, we went out of curiosity and I couldn't believe how dissimilar his work was from mine. Yet I hear it again and again— "Edward Hopper"!  :-)

So after the event, I took some reference photos of the Evening Star Restaurant in Del Ray, something I've been trying to do for over a year. This is for a series I plan to get back to once the show is hung— It's the Saturday Night series, the first one of which is J.P. Licks (now hanging in Gallery B in Bethesda). We also had a terrific dinner and even went for dessert. 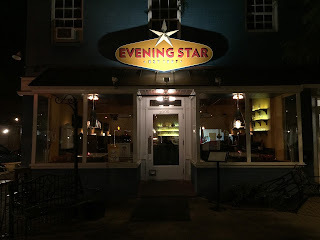 Today I worked on 5 paintings, but panic is beginning to set in. Robert is nearly done, but now I think there are 9 that need a considerable amount of work. I should just chain myself to the easel, and have my husband bring meals down to me.