Every now and then something unexpected happens to throw me off track. In this case, it was an email from a former neighbor, telling me how saddened he was by the death of my neighbor across the street (a nice man who always treated me as though I was smart enough to understand what he was talking about in our conversations in his driveway), SIX MONTHS AGO. I had no idea. I wondered why I hadn't seen him, but it was the cold weather season and I figured he was traveling for work, as he was usually doing.

Anyway, that took the wind out of my sails, so to speak. Things are depressing enough in the Age of Trump. I've had troubled dreams for the past two nights; one involving a man I used to work with who died of a heart attack after an unusually stressful work day years ago. But I did get back into the studio late this afternoon to work on Fashion Forward, and mostly on the reflections on the right side. 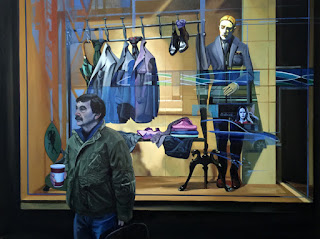 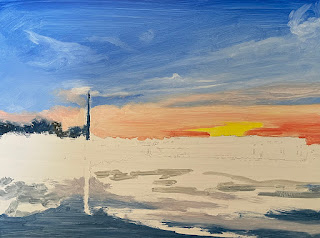