I decided it was time to get back to a couple of projects that have been neglected for a while, and Rita's was at the top of the list. Originally, I wanted the background sky to be a warm black, suggesting the heat and humidity of pavement on a summer night, but it just wasn't working. It looked dull and matte. 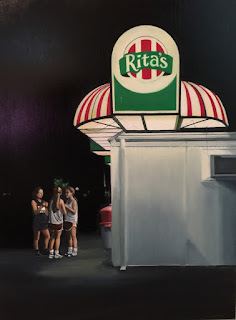 So I looked into Winsor and Newton's Blue Black, which is semi-opaque, and mixed in a touch of medium so it would spread evenly, and then applied it to the entire background. After a few minutes I went back with my fan brush, gently stroking verticals and then crossing with horizontals, and then back again until the paint layer evened out. I'm going to go back to the studio now and see if the paint strokes have self-leveled or whether I need to brush over them lightly again in the opposite direction, but I am pleased with the color. We'll see if it holds up when it's dry. Right now it's an existential black.
at April 07, 2017 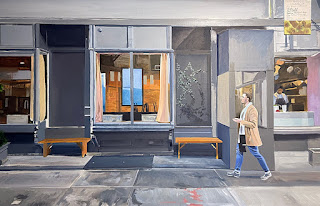